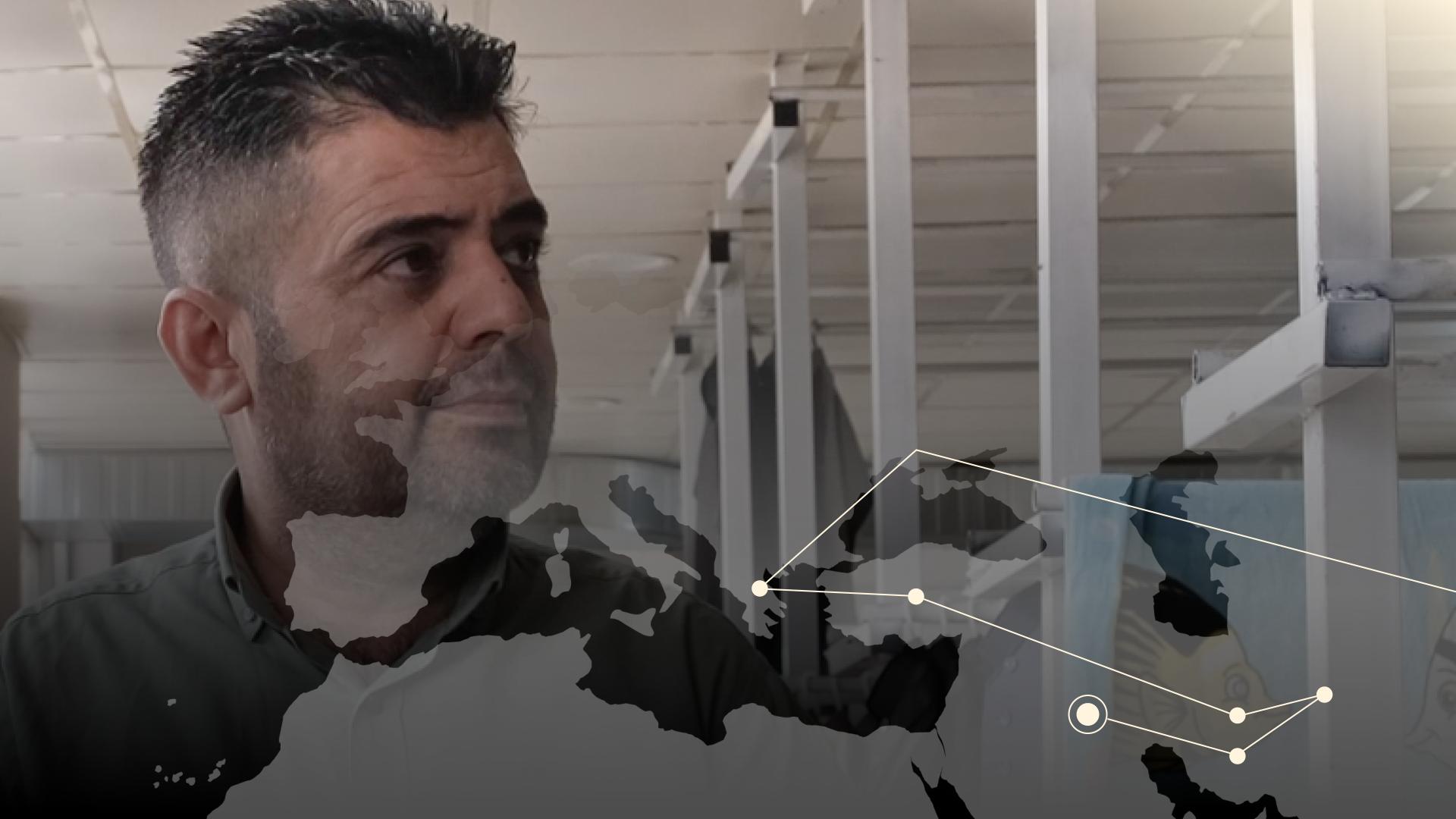 Ibrahim
Growing up surrounded by conflict and insecurity, Ibrahim decided to look for a better life abroad. For 15 years, he lived in Greece. But Iraq always stayed home. When relatives told him it was safe enough to return, Ibrahim went back to build something new.

Even After 15 Years Away, Iraq is Always Home

As you approach Aween Factory on the slopes of the mountains overlooking the town of Sulaymaniyah, in Iraq you are met with a buzzing sound of sewing machines and occasional bursts of laughter and Kurdish chat. At the main entrance stands 42-year-old Ibrahim Mohammed Amin - behind him a hallway lined with stacks of fabric on one end and finished Kurdish attire on the other that opens into a large room buzzing with activities.

His face lights up whenever he talks about the factory, showing off his passion for what he does. His childhood on the other end wasn’t the beam you see today.

Born in the early 80s in the height of the Iran-Iraq war that lasted for almost eight years, Ibrahim’s childhood was marred with conflict. To make matters worse, in his early teen life, the Iraqi Kurdish Civil War in the mid-1990s erupted, stagnating the economy and destabilizing the security situation of his neighborhood, and Ibrahim felt he had no choice but to leave the country.

His journey started off in Iran in the hands of smugglers as they navigated the terrains on their journey to Afghanistan where he was arrested and sent back to Iran. He was determined to go to Europe, so he proceeded to travelled up north to Turkey, and finally made it to Greece.

“The journey was not easy. I was 15-years old and had to depend on different smugglers to facilitate our crossings across five countries, and I was still young back then.”

Along this migratory journey, he had to do casual work between the countries to earn enough to carry on and reach his destination. He worked as a gardener, a cleaner in construction sites, and finally in houses cleaning heating systems after earning the trust of the house owners.

In the back of Ibrahim's mind, Iraq was always home and over the next 15 years, he would frequently keep in touch with his relatives who remained behind, monitoring the situation until it was stable to go back.

“In 2010, one of my relatives told me the country was stable enough and there were job opportunities, so I decided to come back. I left through the hands of smugglers, but I came back voluntarily on plane,” Ibrahim recalls.

After 15 years away from home, I wanted to build something of my own.

During this time away, he developed a knack for business while saving the little he could. This he would later use to start the business back at home.

On his arrival, he set up an import and resale business where he would buy ready-made clothes from both Turkey and China and sell them.

The journey to rebuild was not going to be easy for Ibrahim. In 2014 just as his business was starting to pick up, the war against the Islamic State (ISIL) occurred, and both the economy and security of the entire country were destabilized once again. This time he vowed to stay and continue with what he started amidst the turbulent times.

“When the ISIS war started, it became difficult to import any more clothes. And because I was not planning on leaving, I had to reinvent myself and come up with a working business model that would require using locally available materials. “

In addition to this, there was a constant need to tailor make the traditional Kurdish attire popularly worn in the region because the imported versions from China were not meeting the specifications of the clients.

“In 2017, I started Aween with two sewing machines in a small room in Sulaymaniyah,” He nostalgically recounts. “With raw materials coming from customers, ours is to provide tailoring services and that is the model our business is built around to minimize any risk. We supply the final product to the traders who make the sale.”

Ibrahim's dream was starting to take shape; he had just started the business and was never going to look back. By the end of 2019, he managed to employ over 10 staff and the business was growing.

In a recovering economy, small and medium enterprises (SMEs) face difficulties in acquiring capital and funds to expand, and Ibrahim’s business was not an exception. As he pondered on ways to make his vision come true, ihe learnt about the Enterprise Development Fund from his business networks and his curiosity grew.

“I heard from a friend that IOM was providing funds to businesses to create job opportunities. I applied and met the conditions set and was successful.”

Through the grant, he was provided with USD 30,000 paid in three installments that he invested in the business through equipment and additional workforce.

“From the fund, I bought ten more sewing machines, a generator with improved capacity to sustain the increased workload, additional stitching equipment and hired 13 more staff.”

Since then, the business has moved from the manual processes that were time-consuming and has been able to triple its production - evolving from between 100 to 150 clothes to 500 clothes a day. But more importantly, Ibrahim has been able to sustainably provide a source of income for 40 others, both skilled and unskilled, who in turn support their families.

“It is more than a factory, my fulfilment comes from knowing that you can provide a source of income to the employees. From the amount they make, the ripple effect is wide as they can support their families as well.”

The business runs 24 hours a day with the employees working in two shifts. The business makes between USD 50,000 and 60,000 on a yearly basis with clientele base is spread throughout the four governorates of Kurdistan in Iraq.

“We are already booked throughout the year until March 2023. Expansion is the only way to take in more orders. “

The factory was named after his eldest daughter born a year after Ibrahim came back to Iraq, which in Kurdish translates to ‘love’. The father of four wants a different life for her three daughters and son.

“I want them not to leave the country but instead create opportunities here. I encourage them to have the drive to work and build something of their own here in Iraq.”

Aween is among one of the small and medium enterprises creating job opportunities and rebuilding the economy in Iraq, a country that is rebuilding from years of war. Financial injection by the International Organization for Migration's (IOM) Enterprise Development Fund (EDF), goes a long way in establishment and growth of such businesses. So far more than USD 27 million has been disbursed to over 1,600 businesses that create a source of livelihood for thousands of employees and their families.

He points at a picture of an old man resting is head on a sewing machine. To Ibrahim, this is reflective of where he sees himself in years to come.

“If God gives me life, I want to work until that age,” he mentions. “And even at that age, I want to be on a sewing machine.”